Spitfire Mk Ib (on the workbench)
92 Sqn December 1940
This is my new project. A Spitfire Mk Ib. This time I will represent the aircraft "in flight" with retracted landing gears. The kit is a mix of a Mk Ia fuselage an the wings of a Mk Vb, both are Tamiya brand. I deleted the reinforcement strips of the wings that comes with the Mk Vb (Tamiya). After the general assembling, I applied a coat of primer ( Mr. Surfacer 1200).
Here some pics. More on the way... 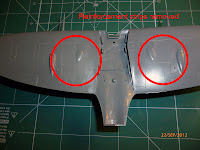 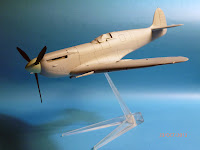 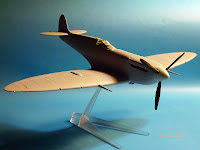 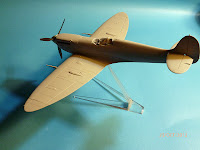 I decided to change the scheme, it will be with the all the undersides sky, as from August 1940 untill November 1940. Upersurfaces RAF Dark Green and RAF Dark Brown camo with Sky band on the fuselage and spinner.

Now I begun with the painting process. The camo is the one for an even serial number Spitfire. Here some pics.
I used Humbrol and Model Master Enamels. The pilot is from and old Airfix Spitfire kit. 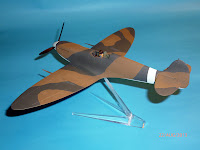 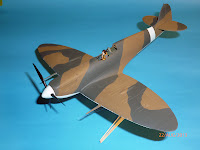 I broke the antena mast on the tail  I fixed it but I´m not happy with the result. I´ll do it .again...
I made the antena mast from scrath, now it looks ok. I leave a little space to insert the cable.
The decaling is going well, the kit decals (Tamiya) are excellent. I´m using Microsol. 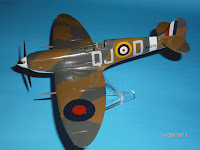 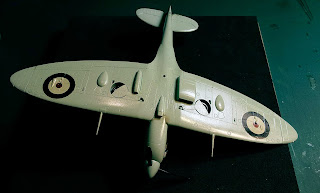 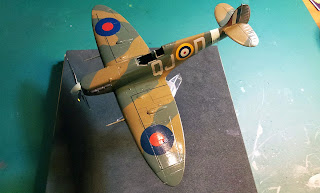 The enhaicing  and weathering of the panel lines was done with Eding microfiber 0.1 mm with permanent ink and artist oil washes. 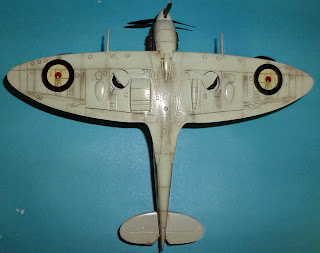 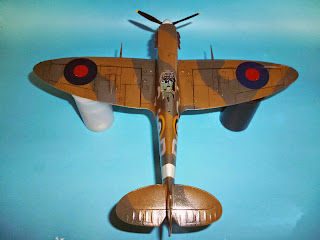 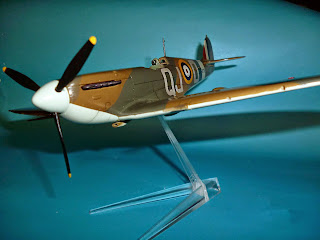 Newer Post Older Post Home
Subscribe to: Post Comments (Atom)
You can use the "Older Posts" & "Newer Posts" links that are at the bottom of the page and the "Labels" to navigate through the entire blog.
It works better with Google Chrome or Firefox.
Click over the pictures to see them full size.